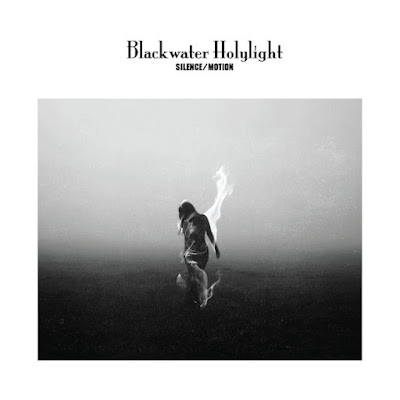 Silence/Motion is the 3rd album from Doom/Psych/Stoner Metallers Blackwater Holylight and they take a different approach for this record compared to their earlier albums. The band sees Blackwater Holylight bringing a heavier style of Doom Metal to their emotionally charged and Occult based sound. The band have guest vocalists bringing a harsher style of vocals with Bryan Funck (THOU), Mike Paparo (Inter Arma) and ALN (Mizmor, HELL). ALN is helping out on production duties as well for this release.

The whole record is a journey of the darker side of Doom Metal and Stoner Metal focusing on grief and loss through the powerful music and lyrics. However, there this is a hopeful side to this album and comes alive through the Psychedelic parts of the record. The whole album moves between Folk Rock and Psych Rock with the Doom and Stoner elements bridging the gap.

The instrumental work is brilliantly slow in places and that’s always been one of Blackwater Holylight’s strengths by creating a dense and cold atmosphere for the music to bring an icy cold sound that instantly draws you in.

The excellent opening songs - Closer, Who The Hell and Silence Motion - are my favourite part of the album as you experience the whole musical adventure that the band create on this record. Gloomy atmospherics build to a heavier and emotional style of music with the “Folk” parts soon giving way to Ambient Metal grooves.

There is quite an experimental approach that Blackwater Holylight uses for this album and it’s quite intense to hear in places especially on the later stages of the record. The band add Black Metal guitars to this album and the whole record still remains in the Doom/Stoner Metal arena. The “guest” vocals all bring a volatile feeling compared to the soothing and eerie vocals of lead vocalist Allison.

One of the songs I have to give particular praise to is Around You. A lovely 60's Psych Rock melody built around lush vocals, stunning ambient sounds and happy carefree lyrics. It shouldn't work but it's the song that brings such a lovely warm feeling that's it's not hard to get swept along by it all.

Silence/Motion is a record I simply adore with its unforgiving nature and brave creative choices the band have delivered for this album. The different moods and textures of the music remind me of YOB and Pallbearer at the top of their creative powers and this album is without doubt Blackwater Holylight best record to date.

This record has everything if you’re looking for an emotionally charged, heavy and trippy experience.

Silence/Motion is a total joy to listen to and is good as it gets within this bleak and uncertain times.

Thanks to Dave at US/THEM PR Group for the promo. Silence/Motion will be available to buy on CD/DD/Vinyl via RidingEasy Records from October 22nd 2021.