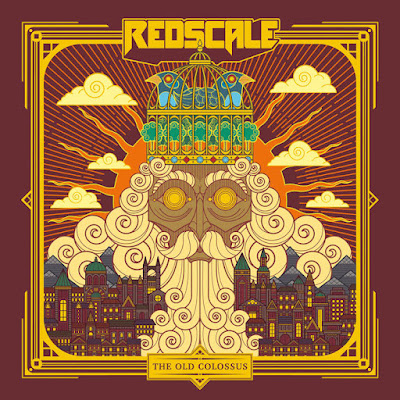 7.Of Wealth and Taste

9.The Lathe of Heaven

The Old Colossus is the 3rd album from German Psych Stoner Rockers Redscale and sees the four piece band taking the tricks and trades from Stoner Rock masters such as KYUSS, Clutch, Fu Manchu and Truckfighers and giving it their own mini-makeover. The album also has a distinctive grunge vibe (Soungarden most definitely on the later stages) and maybe it gives this record a slightly true life vibe.

The vocals are from the Neil Fallon school of vocal delivery with a passionate Blues Rock growl. The album effortlessly moves from Desert Rock, Psych Rock, Stoner Rock and Grunge with the majority of the tracks. There is heavy appetite for FUZZ by Redscale on this release and they can sure give Truckfighers a run for their money in the FUZZ ROCK department.

Redscale have seemed to aim for a more STADIUM ROCK sound on this album and The Old Colossus is full of gigantic Stoner grooves with the emphasis on 90’s based Stoner Rock/Metal. The 9 songs held on the record are all impeccably played, written and recorded that Redscale have steadily been improving since their debut album Set In Stone was released back in Dec 2017.

There is a sense of adventure and urgency behind the majority of the tracks with songs such as: On The Run, “It’s A Death Cult, Baby” and The Old Colossus. Clutch fanatics will go crazy Redscale if they haven’t done so already. Later songs on the album focus more on the heavier style of Stoner Rock with “Of Wealth And Taste” and ``The Lathe Of Heaven''.

Redscale have delivered an album that builds upto a highly energetic and adventurous style of Stoner Rock with rich varied creativity to perhaps push Redscale into the upper levels of Stoner Rock/Metal. The sound and tone of the record is another highlight with superb production values allowing Redscale to deliver their best sounding record to date.

Kudos to Majestic Mountain Records for signing the band to their impressive expanding roster. As they’ve been releasing impressive records of late and will soon be up there with the likes of Ripple Music, Argonauta Records, Heavy Psych Sounds, RidingEasy Records and Kozmik Artifactz within the Stoner Rock underground.

This is Redscale’s show and The Old Colossus is a brilliantly entertaining album and if you’re on the lookout for a good old fashioned Stoner Rock/Metal album that nails the finer elements of the genre down to a fine art form then Redscale are here to welcome you with open arms.

Thanks to Richard at Sheltered Life PR  for the promo. The Old Colossus will be available to buy on CD/DD/Vinyl via Majestic Mountain Records from October 15th 2021.