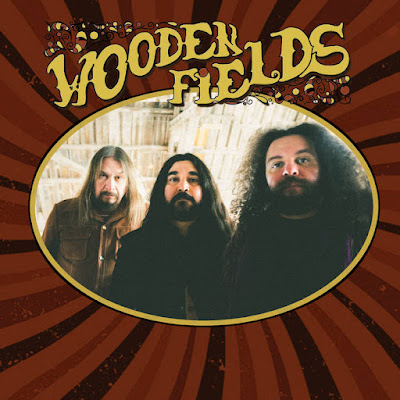 Wooden Fields is the latest musical project featuring members from bands such as Siena Root, Witchcraft and Three Seasons. The band play a mixture of 70’s Classic Hard  Rock with a healthy dose of Blues Rock, Stoner Rock and Psych Rock. Their debut self-titled release isn’t as heavy as I originally anticipated but it’s still a great slice of Classic Rock with fantastic instrumental work throughout.

The Blues Rock vibe is the main driving force here with Siena Root focusing more on melody than aggression with almost laidback classic hard rock vocals that come from the Bad Company/Free style of vocals. There’s a lot of hard rock swagger and confidence heard on the opening couple tracks Read The Signs and Shiver and Shake. The lyrics are bang on point for fans of 70’s Classic Hard Rock with flashy psychedelic grooves levelling up the progressive aspect of the album.

The 7 songs on offer on the record don’t break new musical ground but Wooden Fields still deliver wild riffs that ooze 70’s Hard Rock credibility. The band flirts between musical ideas from bands such as Cream, Led Zepp and Black Sabbath. Maybe they don’t go as heavy as the latter two bands but there’s still some highly powerful sounds on the record especially on the later stages of the album.

There are some fantastic grooves and jams that the members pull in from their current musical projects that it’s best just to sit back and enjoy the ride that Wooden Fields have delivered here. Excellent production values shine through which allow Wooden Fields feel right at home within the modern day Hard Rock scene.

This is a record that’s superbly entertaining and one that will have you coming back for more.

Thanks to Mona at All Noir PR for the promo. Wooden Fields debut album is available to buy now on CD/DD/Vinyl from Argonauta Records.