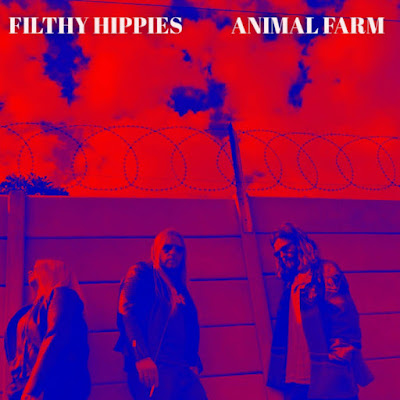 Animal Farm is the second full length release from South African Powerhouse Psych Stoner Rockers Filthy Hippies and it’s a more jarring experience than their previous album Departures released back in April 2021. This time round the band play a more trippy 60s Heavy Psychedelic Experience across fifteen tracks that sees Filthy Hippies live upto their Psychedelic persona. That’s mostly down to the high amount of weird noises and spaced out synths.

The Shoegaze element from their previous album is here as well but with a more out there sense of humour with the lush Psych Stoner moments moving from one crazy moment to the next. The album does feel and sound like a concept album even with the album called Animal Farm I struggled to fully understand the whole message of it all. So I decided to concentrate on the music instead and experienced a Phil Spector hallucinogenic nightmare come to life. That’s what I experienced with Departures but this is a more demented style of Dark and Twisted Psychedelia where you ultimately need patience for this record.

The album does take the best sounds of 60s/70s Psych Rock but then adds an Experimental Stoner Rock vibe. The album runs for over sixty five minutes and the instrumental work is impressive as the dark storytelling going on within the album.

It;’s hard to pick standout songs as my mind changes each time I listen to the album. There’s enough variety to keep everyone entertained but only if you’re a fan of Sonic Experimentation and almost Avant-Garde vocal sounds on certain parts of the album. Filthy Hippies impress the most when they play a more straightforward Electronic based Psych Stoner Rock on the earlier stages of the album. There’s a deep lush romantic quality on the superb third song Feel it that effortlessly combines 60s Psych Rock and 80s Synth Rock with a modern Stoner based flow.

I found Departures one of the toughest records I’ve reviewed in a long time and Animal Farm is no different. Firstly, this is a wonderfully produced package but it’s not going to be for everyone. Maybe, Filthy Hippies are a “niche” band for casual Stoner Rock/Metal fans but that doesn’t stop this record being a highly majestic work of art that only Filthy Hippies can deliver.

Overall, Animal Farm is a challenging, surreal and action-packed album from one of the best Experimental Rock Bands from the South African scene.